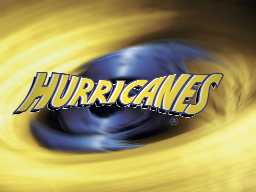 A disappointing performance against the Cheetahs in Bloemfontein this weekend has seen the Hurricanes lose their first game of the season, and drop to second place in the table. In my completely unbiased and objective (yeah right!) opinion the Hurricanes shouldn’t have lost the game. The Cheetahs had a player sin-binned in the first few minutes for a high tackle, but then somehow managed to avoid having another player sin-binned for an even worse tackle a few minutes later. Then, with 10 minutes to go, Ma’a Nonu was sin-binned for a very inocuous tackle, meaning the Hurricanes had to defend with only 14 players. This gave the Cheetahs a chance to use their (illegal) “truck and trailer” forward drive to perfection to score the winning points.

Still, the Hurricanes managed to get a bonus point for losing by fewer than seven points, and are still in second place on the table. Unfortunately for us, the Crusaders won, beating the Blues (now there was a tough game to know who to cheer for!) moving into first place. 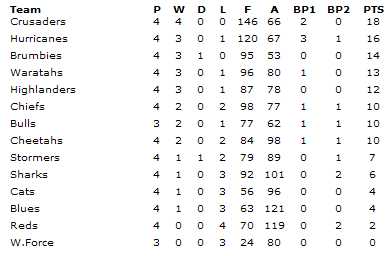 The Crusaders had another poor performance in the Super 14 this weekend, and only just managed to scrape through at home against the Sharks, 22-20. They did so without scoring four tries so didn’t get the bonus point. That means the Hurricanes go top by one whole point! A great start to the season for them, but now come three games away in South Africa, against the Cheetahs, Stormers, then (arguably the hardest) the Bulls. Let’s hope all goes well and they come back to NZ still top. 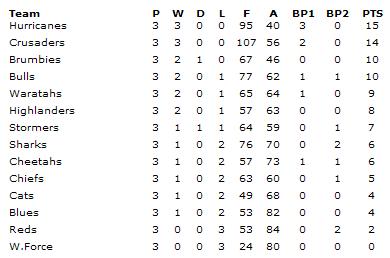 This week the Hurricanes played their first game at the Cake Tin, against the Cats from South Africa. It was a very physical game with an exchange of handbags a couple of times. Although the Cats hadn’t won in Wellington in any of their previous four visits, it looked for a while as if they might manage it this time, with the Hurricanes unable to build a big lead. With only just over two minutes to go, trailing by nine points, and needing to score at least twice to win, the Cats kicked a penalty to at least make sure they would get a bonus point (for losing by fewer than eight points). Or would they?! Unfortunately for them, but fortunately for us Hurricanes fans, with time running out on the clock the Hurricanes managed to score a fourth try and make sure that not only did the ‘Canes bag another five pointer, but they took away the Cats’ bonus point. It was confusing for a moment or two as there were claims of a knock-on by Hurricanes winger Lome Fa’atau and the ref even blew his whistle. Luckily Isaia Toeava who had picked up the ball and run into the end zone didn’t kick the ball away but grounded it. The ref consulted the TJ who confirmed it was not a knock on hence the try was awarded.

Well I thought for a while that we might go top of the table as I watched the Crusaders really struggle against the Reds for a long while into the second half of their game last night. However, the class of the Crusaders came through eventually (unfortunately) and they won comfortably in the end 47-21. Earlier in the weekend, though, the Bulls had failed to win at home against the Brumbies which means the Crusaders and the Hurricanes are alone on 10 points at the top of the table.

Let’s hope the Hurricanes can make it three from three next weekend in the Cake Tin. 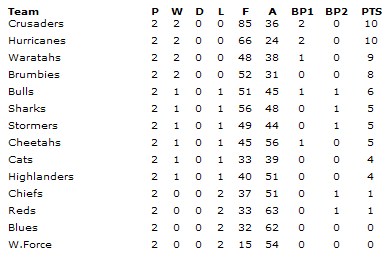 This week’s Hurricanes game was a “home” game in New Plymouth. They played one of the new teams this year – the Western Force from Perth. The ‘Canes came out and scored three unanswered tries within half an hour, but then didn’t score again until the final five minutes, making a bit of a meal of a number of good opportunities. Having finally got our bonus point try (you get a bonus point if you score four tries in the game) and having withstood a lot of Force pressure we unfortunately conceded a try in the dying moments so were unable to keep a clean sheet. Final score Hurricanes 29 Force 5. So, another five pointer and good solid defence, but fustrating with the number of mistakes made, especially the number of penalties conceded. Next week brings us the first home game of the season in Wellington against the Cats, which should be a good game, but still plenty of room for improvement early in the season.

In a repeat of the inaugural game in Super 12 rugby, the first ever Super 14 game was played tonight with the Hurricanes (hooray!) visiting Eden Park to play the Blues (boo!). Although they didn’t play well in the first half and went in at the break 16-3 down, the ‘Canes decided they would play rugby after all in the second half and won the game 37-19 to start the season with a bonus point win and second place on the table. Isabel’s favourite Tana Umaga went off in the second half with a calf strain, so we’re not sure if he’ll be playing next week, but time will tell. 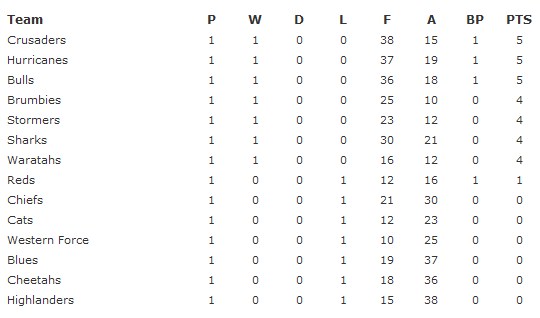 Well, the last game of the season for the Lions was a game only for pride and a chance to show the All Blacks and Hurricanes selectors what they can do. They played Taranaki on a wet and blustery Friday evening in New Plymouth. The Lions’ All Blacks players made the difference on the night and helped the team to a 31-17 win. Each side scored three tries, but it was the kicking of the Lions (first of all from Jimmy Gopperth (playing at an unfamiliar full-back position) then scrum half Piri Weepu once Gopperth was substituted) that made the difference. Four penalties and one extra conversion being the margin at the end.

So the Lions’ have a break now and can only sit back and watch the semis and final on TV. Hopefully, though, a number of them will be picked for the All Blacks Grand Slam tour of the UK which kicks off in four weeks’ time against the Welsh at the Millennium Stadium.

Unfortunately, the result of the all South Island clash this weekend was Otago 24 Canterbury 19. This meant that Otago moved up to third place, ahead of North Harbour, and means that, regardless of the results next weekend the Lions won’t make it to the semi-finals. They are five points behind Harbour, but even a bonus point win (ie five points) would mean that Harbour get through on the head to head result (Harbour beat us in our first home game of the season). D’oh!

Well, the Lions’ hopes of qualifying for the semi-finals took another dent yesterday as they were unluckily beaten by Auckland, 29-22. Although the Lions had their big name All Blacks back (Umaga and So’oialo) and had most of the possession AND scored more tries, they still lost the game. And despite the fact that, in my humble, unbiased, one-eyed-fan’s perspective, the first of the two Auckland tries included a blatant forward pass and the second was scored from an offside position apparently didn’t matter – they were both still given. So, despite the fact that the moral victory was the Lions’ they only scored one point for NPC purposes. We’re therefore going to be dependent upon other results both this week and next to determine if we’re able to climb into the final semi-final place. Oh well, time will tell ….

Having just managed to overcome the Bay of Plenty last week, we went to watch the Lions’ last home game of the season (unless they finish first or second in the table, of course, in which case they will play a home semi / final) not quite sure what to expect. The opposition was Southland, not normally regarded for their rugby achievements, but having had a number of reasonable results this season.

In the end it was a relatively one-sided affair, with Wellington running out winners 53-12 and scoring seven tries in the process. That consolidates our position in third place in the table, and means with a bit of luck we should make it through to the semi-finals. Having said that our last three games of the season are on the road, including away to Canterbury next week (they’re currently top of the table) then away to Auckland the week after (they’re currently second in the table). Oh well! We can but hope.

We were all able to go to the game this week as Rodney was on holiday in Rarotonga so his ticket was going spare. Unfortunately, having started off as a bright sunny day, the clouds came in mid-afternoon and the wind picked up. We’re due to be experiencing a southerly over the next few days too, so it was also a very cold wind.

Winchursts on the Web > Wellington Rugby