We’re currently enjoying the last week of our time before I start work, and the build up to the Easter weekend. We’ve been staying at the Hotel Winchurst in Devon as the rates are very good, and there are no early morning wake up calls (except for those provided by our beautiful daughter who frequently sits in her cot in the morning chatting away merrily to herself, whilst Mummy and Daddy lie as still as possible in the vain hope she won’t realise we’re awake too, so we can squeeze out a few extra moments in bed!)

We’ve got a few photos that we’ll put up into a gallery when we get a chance (including lunch out with Uncle Clive and Auntie Avril, who have recently added to the number of Winchursts living in Holsworthy, and our trip to the Prickly Ball Farm (a hedgehog rescue centre) where Isabel was more interested in the other children, the toys and the poo than she was in animals that were there (still, Mummy enjoyed the animals enough for both of them!)). So for the time being you’ll have to make do with the photos below which, in case you haven’t looked at them yet, are of … yes, you’ve guessed it … Isabel. 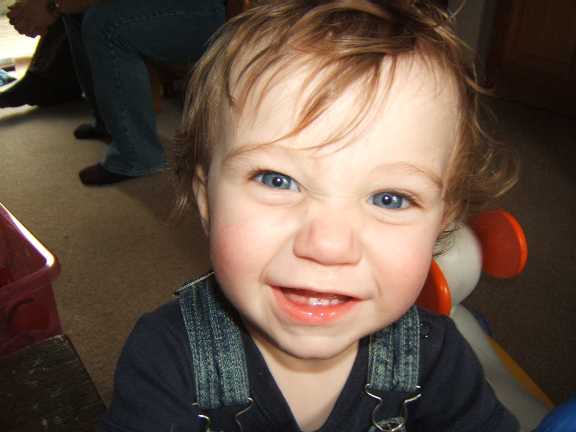 This is a close up picture taken, presumably, by Grandma Pam (given it was on her camera!). It shows the beautiful Miss Winchurst posing for the camera!

You give her a KitKat, then turn your back for thirty seconds and look what happens! We’re guessing she liked it! It took us (or should I say it took Kate?!) the best part of half an hour to clean up the mess, and we were finding nearly eaten bits of KitKat wafer for days!!

Isabel is a very inquisitive child and loves the fact there are five animals in the Winchurst house (not including the goldfish … or Daddy). Unfortunately, not all these creatures are quite as taken with Isabel as she is with them. A certain bruiser by the name of Charles (ginger pussy cat) decided that he had had enough the other day and (just as Mummy had warned her he would) decided to indicate to Miss Winchurst that he wasn’t happy with her proximity. The result: a cut on the nose, a LOT of tears, and the first of what I’m sure will be many plasters over the years to come!

Just wanted to post a quick note to let you all know that, following my interview last Thursday afternoon, I had a phone call on Friday evening to tell me that I was successful and they will be offering me the job.

Earning again. The bank manager will be pleased!

Everything is still to be finalised, and agreed in writing, but I have agreed everything verbally with them and I start on Monday 10th April. (It is just by coincidence that I have since realised that, thanks to Easter, my first two weeks back at work will be four day weeks!) They have kindly agreed to put us up (probably in a hotel initially) for the first month, which will give us a chance to find somewhere to move whilst our house in NZ sells, after which we’ll look for somewhere to buy.